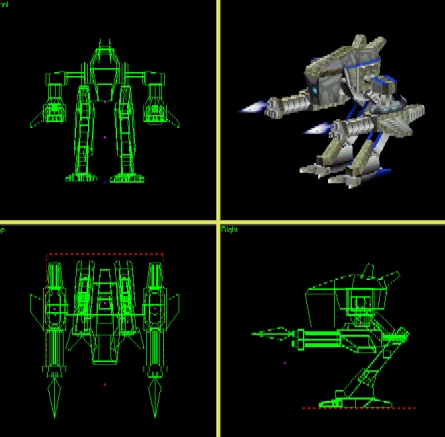 Special: I don't know if my version of Razorback is demented or just a FUBAR copy, but I happened to have another version of it on the HDD (/Razorback, Special Edition/) since long ago. That version had absolute perfect script and a much better model, corpse and texxing, although the buildpic was rather messy, I can't understand which of them is the new one after all. Anyway, one thing for sure, it would get even lower balance score, but it looked very cool actually.

Buildpic: It’s too dark… well, a bit too dark. I’ve experimented myself a little and got an own light and bright version (compare here). The angle is rather good, although reminding very much of the Raptor and this one seem to me to be of very similar light and color-scheme as the Mayhem Gargoyle and Shellshocker [3]. The background is very nice, with exception of a suspicious shading of the heaven that is shaded lighter downwards of all directions [2.5]. The mix is painless and so good that it barely can be seen, so full points for that [3].

Model: The model is erm… original. Two peaks on the back of the “head” – cute : ) And those toes seem to be taken directly from the Raptor (or it might perhaps be the opposite). Two arms and the position of the legs directly reveal that this model is one of many. Used so many times in so many variations that I’ve lost the count. I also see a wonderful excess of faces everywhere. Under the legs (the toes themselves), under the head, the poles that hold the arms are useless too, and so is the pelvis. It might look good in the 3DO, but they’re useless in-game. I mean 500 faces are a bit too much, even for a big unit [1]. The textures are very variated and good placed, but much of the arm camo texxing floats into something green in-game and those pikes on the back of the head are actually never seen. The cannons are cleverly textured, but the changing-color texture is more annoying than flashy [4]. The corpse is there and that’s it. The author have turned and twisted the body and even deleted some components to give it a FUBAR look but then committed the horrible crime to texture all 515 faces with the same goddamn texture and it looks just horrible. And although, it looks like he imported the entire wrecked .lwo as one piece, he didn’t even think about deleting the down warding faces. I give you the lowest I have, the zero for the corpse and I curse myself that I didn’t have negative point system from the start.

Script: Although, this looks like a standard Raptor-look-alike-walk-script, the author has tried to make an own one but without any special success. The poor legs get stuck in mid-air when reaching their ultimate positions just too long to look naturally. To explain what I mean, I would like to ask you, who read this review to stand up and walk. When your legs reach the maximum (i.e. the longest distance from each other) – freeze for a second, but continue moving forward, then take a new step and freeze and so on… all the time with constant speed. And this unit is version 3.1 too (I happen to have version 1.0 : D ) so one suspect that such bugs should be fixed long ago. Anyway, the fire animation is nice done, but the deceleration speed for the arms is too long. Machine guns don’t spin because they like it, they spin because they are forced to. Please accept the fact. The random fire script might look flashy in the notepad, but it’s just frustrating in-game, having the left gun shoot fifteen shots in a row, then two from the right then fifteen from the left again. It’s just not the right thing, you know.

Balance: First of all, it feels like it got too much armor, but it’s actually ok, for its costs, but the problem is (as usual) the weapon. It is a special, D-gun like weapon that rolls on the ground and can damage several units that happen to get in the way. The Core Goliath does 130 damage/sec at a range of 400. The Razorback weapon rolls rather long at that range (since it still rolls five times at the max range – 450), doing at least 75 damage/shot for a small ground unit (I’m not even counting factories and units behind). The big problem is that it makes 3.3 shots/sec, making that relatively comparable 75 into a friggin 250! It’s also set to do twice, sometimes even triple damage to defensive structures such as HLTs and Punishers. The fact that this guy got double speed of a Goliath too and seems to be quite capable to climb hills doesn’t make things better. You seem to have tried to compensate for that with high build-time, but that’s not the way to make things be balanced. The build time is only a factor of having an acceptable amount of metal drain per second. I’d suggested that you removed all the extra-damage and reduced the damage-per-hit-factor to at least 7 from 25.

My score: I hate the Raptor and all look-alikes. The concept is so overused and overpimped (thank Gamefreak for that : P) that it is almost painful…