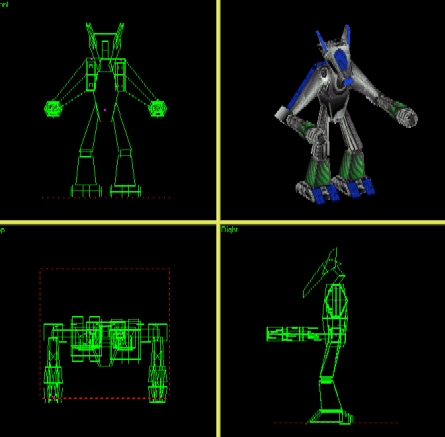 Buildpic: The unit is placed in a good angle, but it seems more like a statue than a actual unit. The poly number is good [3.5]. The background is good-looking too, although a bit too plain on a bit too large spot [3]. The mixing is not as it should be... every kid can see the shadow of the unit coming from left to right and a bit forward, but the unit textures tells you a completely another story and if you look at the mountains, they look a bit odd too [1.5].

Model: A rather intelligent idea of an anorectic robot with humanoid look and the creation part looks rather good, actually, except the arms that silly points out all the time. Ever walked around a whole day with your arms and legs in such angle that this guy? Don't think so... Anyway, a horrible crime has been committed: although the arms never rise, the torso got only one single face in the whole body removed... tsk, tsk, tsk... The guns are also flooded with useless faces so the total is up over 350 faces total and that is not acceptable [1]. The texturing is acceptable and even cool, considering such high detail-ammount. The shading is cool and the logo texxing is intelligent placed (except for the feet). The Core logotype on the head doesen't look good through because of the deformed form it gets there. Would fit better on the chest [4.5]. The corpse is... well... tasteless... The creator did not remove any bad faces but twisted the model a bit and colored everything the same. Zero for you...

Script: The walking looks odd and unnatural due lack of knee joints. Zippers and Freakers have no either, but they /jump" around and it looks great. This doesn't. The turning of the torso forward when the foot touches ground just looks pathetic.

Balance: To best understand this score, you should read the balance score of the Razorback first. This unit got, for 50 % higher costs the double damage/sec that of Razor and a hell of a longer range. And since the Razorback was unbalanced too, this one is even worse. Shame on you... Booo!

My score: Like the concept a bit, but the balance kills it all...