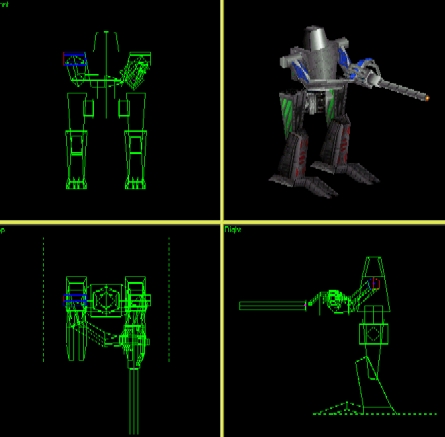 Buildpic: The unit looks pretty good, although I did first think that the body was a big giant blob (think anout it, the head and the body textures blends into each other). The angle is good and the unit looks determined to do something whatever that could be [3.5]. The background could and should be a bit more interesting because plains and an overexposed horison don't contribute with so much [2]. The merging is done very good, in best M3G style (fairly surprizing since he was the one to make this pic) [3].

Model: This model does really tease my trigger happy delete button finger. It has far over 100 faces, yet being just a snap bigger than a PeeWee. I admit that I am repelled by the design - squarish, facecount abusive and partly useless. The shoulders have seven faces each instead of the more proper four. The gun handle got 41 and can easily be cut to say, 10 (even five for that matter, I've just discovered that none of the faces on the underside have been removed, not even on the small friggin handles)... The left arm got 20 faces for pure nothing, since most of the details are lost in a multicolored grey blob (!) in-game. The torso itself however manage to look acceptable while everything beneath just... just... BAD. The legs are just too dark, there is a face-wasting pelvis that is never seen, despite the many faces, it is still squarish and the /toes" are horrific! Imagine yourself have three times longer feet (not legs) than current and try to run with 'em on. And not only, they even got 20 bloody exess faces together and they look terrible in the game! And I haven't even started with my minor-flaw-comments like the faces on the side of the torso... [00] (notice the double zero). The texturing isn't much better either, the legs is as I said too dark, the cannon too repetive... at least you have a good proportion of logo textures and torso+head looks somewhat descent, but the rest is pretty much crap [1]. I look at the corpse and ow, ow, what do I see? A pile of 180 faces lying there colored in the same bloody texture!! I thought these kind of copses were long passé, but it turns out I was wrong in the thought that people learn from other's misstakes... [0]

Script: Uh, moving the legs back and forth can't be so hard to do, yet the walkscript is incredibly long. I thought that it was enough with two blocks with about six rows in each. I've done that myself all the time. If you want, I could send you a script to look on... The recoil animation looks good, but I don't undestand why the bot turn the gun and hands down after the shot. I'd also be much happier if you bothered to have an off script too, just like the OTA shooter that walks around, unfolds the gun and shoots.

Balance: This unit is equally underpowered as the Striker was. It cost a bit more, but it's lvl1. For the same costs as building one of these, you can easily draft four Storms and they would most certainly en the miserable life of our long-boots bot. Lower the costs with 100M  and bump the sped a little bit and maybe this guy can withstand a Samson.

My score: No... no... no... thi ain't even going to the detaiment section as all other .ufos I download. This is Trash Bin time.... And ono more thing: how is this unit supposed to be stealth when this big blue blob flies across the screen? don't have any model for the shot, m'kay.