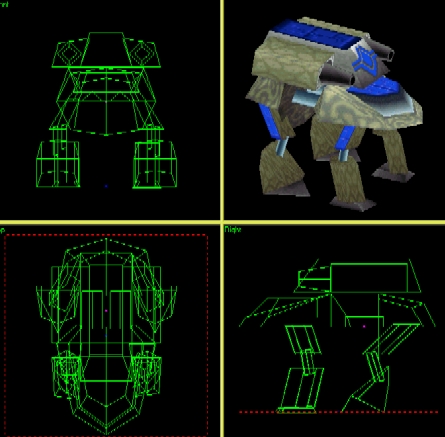 Re-Revision: Read the older review of the unit here.

Revision: Read the review of the original unit here.

Buildpic: The pic was and still is very good and since it haven't been changed, my score isn't either.

Model: Hmm, yeah. This model have been through a major face cut... half of the faces have been removed and I still claim that you can kill even more. Although the middle section have lost so many faces, it should rather be removed completely. The creators said that you would see the pipes in occasional situations in-game, but alas, they never show up. There is also one forgotten face on the inner side of the left back leg (the one that shows up in the picture above) but I feel very harmless today, so I won't give you lower score for that [3]. The texturing still looks rather good, reminding me in many ways of a standard OTA unit, but the logo between the launchers should still be the lighter variant, and the launchers themselves should be a bit different textured from the body, but otherwise it's fine actually [4]. The corpse this unit use is Fido's and I can't blame Cavedog for having a bad corpse, can I? Nah, but I still think that you were just too lazy to make a corpse that would take about twenty minutes of work [1].

Script: The script is much better now. The right side bug have been killed and the legs move a bit more freely, but it still lacks that little something to look really realistic. Mind you, I don't do this because I don't like you to have the first place... And as a side note, I think that you should slow down the turret turning again. It looked better back then.

Balance: As you see in the stats above, the metal cost were actually increased, while the energy dropped with a thousan units. I find that pretty strange since for example Fido cost less metal, but got more energy... The reason for the cost increase is however the armor bump (that is far more than I expected: 1000 units instead of the 200 I was asking for) and the weapon range increase. Compared to Fido's weapon that does double the damage on shorter range, I actually find Striker rather balanced. Actually very balanced... Hmm... I didn't expect this turning out like this because when I saw the armor increase, I wondered /What have they done now?/, but it actually seems prudent. You see it cost four times more than a Storm, having the same damage/second ratio, but it got much longer range and an armor boost that is worth two Storms. I admit I didn't expect such a turnover...

My score: Ladies aaand gentlemen... we got a winner!