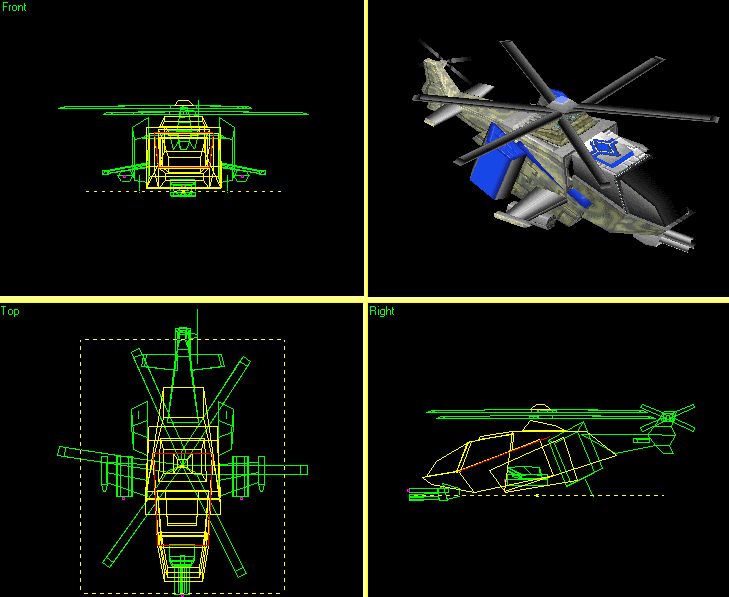 Update: Oops…forgot to talk about some key factors in the review that I should of added previously, including previous scores. As well, Storm tells me that there is no such thing as a .05 in a review. Hmmph.

Buildpic: I have to thank the creator for adding a large rendered version of the buildpic with the .zip file, because it’s a lot easier than to work with the one in the .ufo (or any ufo for that matter). Okay, to the review. The unit in the picture is very sharp, nicely detailed, and very realistic looking [4]. The background is nice [3], and the merging is excellent. It actually looks like it’s supposed to be there. However, it is a helicopter unit, and it should have rotor effects. It’s not a Brawler! Add some blurring to the blades to simulate rotation for a full mark [2.5].

Model: The model in game looks good, and is greatly superior compared to the old ugly one from before. However the ‘thrust jets’ sticking out the side look out of place, and the flames that are emitted just give me the creeps. Get rid of them, or else remodel them so they are a lot smaller. Also, replace the fire with a smoke animation because the fire looks weird because it abruptly ends about a Magnum’s length away. Otherwise the model’s fine, except maybe a few micrometer longer to correct the stubbiness. I should also add that the rear props collide with the front (which in real life would really suck, losing your tail rotor due to a design flaw), so the stretch is compulsory before I give full marks [2.5]. The texturing and logo textures are well chosen, and correctly placed [3], and the corpse is fine. What corpse? Exactly. [1]

Script: Some standard animation and rotor movement, which looks really nice. Although Storm likes the jet thrust thingies, I think as aforementioned that they should be either deleted, or the graphic changed. Smoke would be a better substitute. Previously mentioned fixes have been implemented.

Balance: When I tested this unit in game, I noticed that even one Magnum was owning the enemy units I was going against. With the missile, and the gun, which is far superior to the Brawlers, due to the fact that it is turret mounted (I actually saw one Magnum shoot down a PURSUING Avenger using it), it’s overly powerful to the Brawler. Because of the missile and the turreted gun, it’s also quite effective at attacking air units in comparison. However, I noticed that they had a tendency of getting somewhat easily destroyed when attacking, but that was mainly because I was attacking against a heavily fortified base. The Magnum also has some extreme manoeuvrability, which allowed it to dodge many things that the Brawler cannot while sweep attacking. From what I’ve understood about this unit, it has twice the costs, ten percent more armor, FOUR TIMES the firepower, approximately twice the buildtime, fifteen times less velocity, ten percent more superior maneuverability, a superior radar (which should be banned from any combat aircraft, except ones with a compensated cost, and the fact that the main gun can turn on a turret, making it infinitely more useful than a Brawler's main gun makes this unit overpowered. If you either by cutting down the armor a tad, or slightly weakening the main gun (or else make it only be able to fire forwards, which then would require a small boost of firepower to compensate), as well as removing the radar, will make this unit fully balanced. The fact that the main gun can aim a full 360* throws off the balance significantly.

My score: I remember loving this unit before I became a URC reviewer, and I love it now even more. I’m glad this unit scored higher, and I hope that once the changes are made, that it will be perfect.