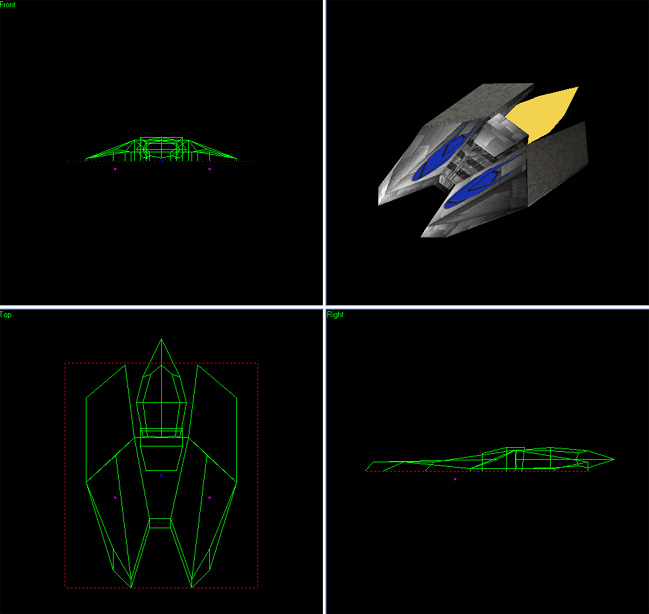 Buildpic: Besides the really really dark unit, the picture is really good.

Model: Something that is more interesting, though is the model. It doesn't really follow any traditional ways of design that has been established through out the Core dominated areas and even though I wasn't as strict on it the last time, I'm definitely more concerned now. The new rear flaps that had been added on the unit are so ugly, I can't even spell to it. Not only do they not fit in the game, they are in direct violation of my design taste. They don't fit the game at any point at all and ruins the little credibility this model actually had (not that even remotely assembles any OTA plane, but I just thought that it could be possible to create a new class, as long as the model is good) [1]. The texturing has CD:3D, but that's about the only thing that is good because the plane is covered entirely in metal shades, without a thought of OTA texturing with really awkward dark, stretched core logotypes on the sides that (I can assure you) looks just horrible in the game. The rear flaps I talked about are texxed with plain grey color and makes the unit look even worse [1]. The is no need of corpses for planes [1].

Script: There is no wingfolding script present, but that is not what bothers me. What does bother me is the improper use of fire and smoke. The smoke shouldn't be used at all in first place and the fire should be prohibited when the unit is standing still (i.e. taking off and landing).

Balance: Oh wow. This will be interesting. Since the last version, this unit has been improved with higher armor, better engines and lower costs, which means that is should be quite balanced (if not overpowered) now if the calculations from the last version were correctly assumed. However, there is a point that changes everything. Thing is that this unit for some reason needs open line of sight to be able to even fire it's weapon. I set six screamers to kill off a unit plant and only every fifth or sixth flyby actually results in some missiles dropped and i most cases gravely overshooting the target (and if it does that to something as large as a plant, what are we to expect from smaller units like fusions or antinukes or god forbid - the commander?). No really, it flies so damn fast that the chances of a hit with an anti-air weapon (or any weapon at all, doh) are almost zip. It even outclasses the Hawk/Vamp by a factor of two, making the life really harsh for missiles and other stuff, but due to it's speed (well, I think it is anyway) it has immense troubles with to-hit experience. So on short, this unit is balanced because it is unbalanced and I don't really know if I should be tolerating a flaw like this. You will get a higher balance score, but not because you deserve so.

My score: This unit is plain ugly and quite depressing to play with mainly because it stands out so much from the rest of the game. The burst weapon would actually be great if it was a kinda secondary weapon (very low reloadtime, like 0.1 or something instead of burst even) with an own will and low damage rating with large inaccuracy. The primary weapon could be a more powerful, restricted version of this weapon (that would fire say ten shots in a row and then bound in the script to reload for ten seconds). As it is right now, it's just a fuxxored version of the Phoenix.