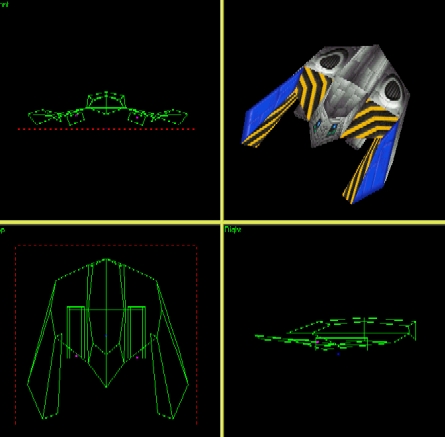 Buildpic: What does bother me in this picture is the very odd illumination of the unit (as the sky in the background tries to tell us something else. But what the heck...

Model: The unit is sligtly oversized, cut with about 20% and tighten the groundplate. The overall body might also be stretched in z-axis to create a more slick version that better represents the high speed - low turnrate of the unit (despite that current aerodynamic physics tell us that the longer forth the wings are bent, the better maneuverability while delta wings represent high speed). The very characteristic wings should be slightly redesigned (sharpened up in front and maybe a tilt of say 30 degrees down seen from the body) as they don't really look thought through. There are no useless faces as far as I could see and the face count as whole is impressively low [4]. The texturing is not impressive, the warning texxes belong to construction units and not assault planes and the fact is not easied by the more or less abuse of them. There is no CD:3D shading and most of the existing shades points in many different directions, destroying the main impression. The exaust vents does not fit this unit (and by experience, I'm convinced that it doesn't fit any unit in fact) and the overall impression in the game is a grey blob with warning textures flying back and forth (just like bricks don't) [1]. Corpse is lacking, but it's a plane and no problems could be detected [1].

Script: It doesn't even fold in the wings when landing...

Balance: I suspect that this unit is underpowered. You see, despite the high damage/second count you can see on the weapon above, the unit fires off a burst relatively rare when making runs, just like the Phoenix bomber. The difference is that five bombs accidently lost over an enemy target from Phoenix's bay are worth the exact amount of pain as the ten missiles that the Screamer emits while the Screamer costs twice as much and actually got one tenth as much armor. One direct hit from a Missile Tower and your Screamer is gone (in fact, the only units that fails taking him out with one missile shot are the Crasher/Jethro kbots). The extreme velocity that this unit can hold will probably save it from most of the enemy anti-air fortifications (however the acceleration is slow and developing maximum speed takes a while) and the missile burst can sometimes be launched spontaniously, as they are direct offensive weapons without any clear need of be dropped, but there is still a big gap left in the stats. For such huge costs you can just as like gather twice as many heavy bombers that will also take time to annoy your opponent with those small pesky lasers.

My score: Personally, I use to see forward-bent units with the wings attached on the outside and not integrated with the main hull. I think it looks alot cooler that way. Further, I would like to see some kind of engine posts on both wings where a box goes from the middle of the body and back to end in a bright orange texture. As for the opinion, the plane is both too large and too useless in battle for me to use. The .bmp pictures in the unit folder are completely useless - delete.