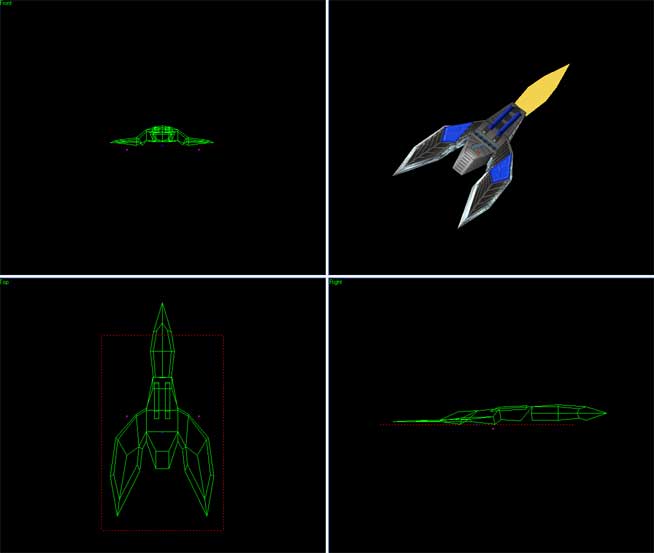 Buildpic: The buildpic very good, except for the lack of (good) contour and the odd wake on the left wing.

Model: Since the model doesn't really fit into the OTA universe, it can not get full score in ths area. However, what I see looks very good and creative. The two bars on the back should perhaps be exchanged into one, thicker... [2]. The texturing is as close to perfection as you can get, without actually being there. I like the wings with their the razor-like look, almost complete CD-3D and very nice logotyping. Still however, no OTA - no full score [4]. Corpse ain't a problem [1].

Script: The script is fine mostly, but things that I would like to see here is some kind of wing folding and engine flare animation instead of those fire tracks it leaves behind with certain spaces. Create a second (or even a third), a bit smaller and differently colored, exhaust flame and use a function to randomly alternate between them to make it look like something is burning there. The fire tracking barely fits the Atlas, and even less the Screamer. Damn, I should come up with a system where I can give smaller script score penalties just like that.

Balance: As of now, the hideous speed of this unit is balanced out by it's quite ineffective damage rating and high inaccuracy. However, this unit also costs 150 energy per tick to maintain, so unless you're careful, as few as ten of them will suck your reserves dry (bleh, I'm just thinking of porn). This is a cruel, but effective limitation of Screamers in the air and while being generally needed, this fact pushes down the usefulness of this unit a lot. I'd suggest to lower the maintenance costs to no more than 80E to promote of more blatant misuse of totally insane airborne crafts but increasing the area of effect by a factor of two to effectively cover a lot of ground without making five rounds to hit a mex.

My score: I'm all against such speed amounts that renders a unit almost invincible.