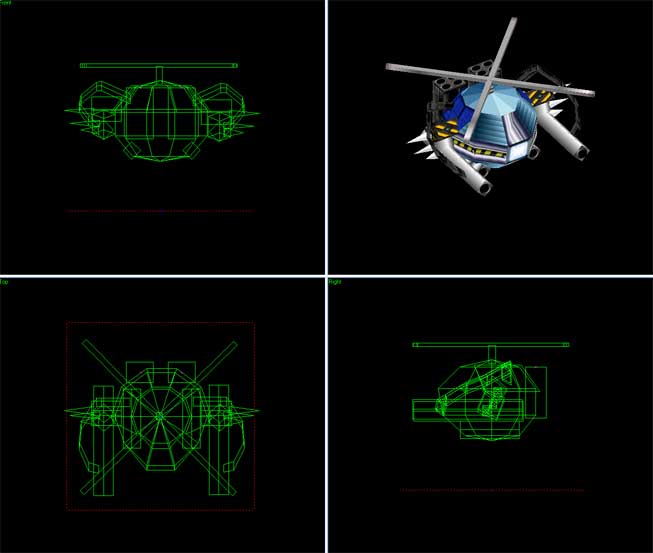 Buildpic: This picture is overall very nicely done and would easily get a 9.5 (because of the slightly odd unit-background mismatch) due to the very realistic camera shot, if not for the wonderful, ugly beam across the whole thing. It so ugly, Photoshop start to bleed upon exposure (I have tried) and it curses mein eyes! It doesn\'t fit anywhere by a mile\'s range, it doesn\'t even remotely resemble a beam, it is completely ugly and it will cause brain tumors. Why there is a glowing bar in that picture, we can only ask. It would look hundreds of times better without it or at least with a proper versiont that looks like a bolt of something. As a direct result of this, the merging score is no more.

Model: The model does also look like something taped together out of scrap parts stolen from Dr. Robotnik (you know that guy that builds funky ugly stuff to rob Sonic of all rings). The main body is a giant sphere that where two barrels and a pair of launchers are dodgily attached (the barrels are barely hanging there at all). There is no kind of elegance, not even the bulky elegance of large fat things with barrels - it's an armed ball and that's it. It is an insult towards all the well designed Cavedog units with it's massive tanks and streamlined planes. This is a fucking ball hanging in the air for no specific reasons! No actually, the reason for it hanging in the air is the totally undeveloped helicopter-like propeller on top. Four thin, short blades seem to be enough to lift this hideous oversized body high up in the sky for all to see. Judging by the probability ratio of such a thing lifting off, normal choppers should be able to transport medium sized frigates around the globe and a those old bi- and triplanes could very well gain enough speed to reach outer space. This unit is also fantastically face-inefficient, lagging down even my 2.6 Ghz processor as I opened the model in the 3DO Builder, but since it is so large, the face count as a whole is kept within reasonable proportions... And that's about the only positive thing about the model [0]. The texturing is not of same qualities, but have several general flaws anyway. Fisrt of all, there are no light team textures in place and all eventual colors but blue automatically look bad on the generally blue unit. The very top segment of the sphere seem to have kept it's original Core Fusion colors - which totally don't fit in that place - is the only part of the unit to be properly Cavedog textured while the shades on the rest of the model are turned in whatever way they please [1]. There is no coprse, but planes shouldn't have one [1].

Script: This unit attacks like a brawler, but have a different aiming system where it turns the whole body towards the target as a (normally looking) chopper can do which means that it can still act as it flies by, in similarity to the Adv. bomber, but doesn't make any runs back and forth over the target.

Balance: Despite of what you might think, this unit is actually somewhat balanced. It got a damage output that isn't far away from the Krogoth's, but it is crippled with very short range and due to it's slow speed and insane size (larger than Mr. K... and flying - teh yuck) no units have any specific troubles hitting it, besides maybe the ones with really short ranges like Weasels or something, and since it is counted as flying object, it can also be targetted by various Flak installations that are proven to be absurdly effective. Despite it's giant costs and size, it only got one sixth of the Krog's armor while being deadly ineffective. Don't get me wrong, now - it packs more than a punch at enemies within range, but to get in range, it must slowly float in front of it first, which I noticed when Two Punishers stripped this thing off half it's health before I could nail them down and that opponent, lady and gentlemen, was a simple AI. A human opponent would have made that thing no more within mere seconds. Three of them (equals the cost of one single Krogoth) would be a bit more of problem, though, just like a Krogoth itself in general, so this unit isn't all that bad as the text above might made you think. It is quite inferior when it comes to armor and range, but it makes up for those losses somewhat with a generally much higher speed, water passing abilities (yeah, it could be used in war battles too, but it is strongly unadvised, since the boats would shred it into million pieces before it even gets there) and the quite low build time. Lower the costs to about 8000M and we could have a deal.

My score: Teh yuck. The one of the ugliest fucking units I've ever seen, no kidding there.