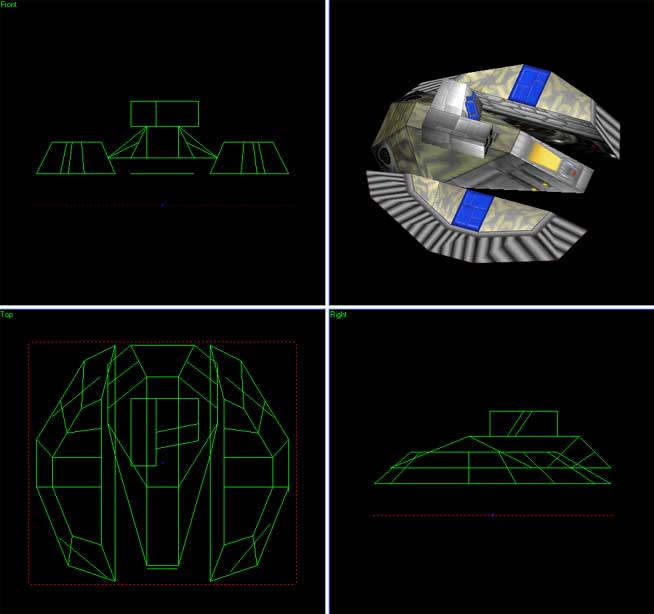 Buildpic: The unit itself looks nice, elthough there is a minor cut for the countourless turret that is hard to notice [2.5]. The background is truly amazing. I would love to have a larger version of that pic as desctop background [3]. However, it is in the merging this, otherwise magnificent picture falls. If you only look at the rear parts, it looks perfectly fine, but the shadows in the front severily harms the illusion of three dimensions and the fact that the body covers a bush in the direct foreground totally kills it. The unit looks taped into that wonderful world in the same way as carbon copies for upcoming movies. If you manage to make that bush cover a part of the unit instead, it would really give a depth of reality [1.5].

Model: The only change made to model as far as I've noticed is that the cockpit with all belongings has been raised a tad and one or two faces has been retextured. I can with joy inform you that the pontones/tracks still look like some kind of rabid offspring from some kind of tractor fertilization experiment with basic Arm looks in front and something inbetween a wreckage and a futuristic ironing board. They are too small and, as it seems, hardly functionable compared to the very large cockpit. The cockpit, my next point of exclamation, doesn't follow the cavedog design especially much. It is thick and bulky and kinda dodgy rounded up. The turret doesn't really support the firepower this unit is equpped with and should in my opinion be remodelled to have a larger weapon to fit in all the four rockets and maybe even a spinning variant that rotates a few degrees after each shot in the same way as the Arm Defender missile tower [1]. The texturing, as said in the previous review, lacks CD:3D to a large extent and thus making the tracks look even uglier than they are. There should be no kind of cross-stripes there since no Cavedog model seem to have any. If you insist to have an external team color line somewhere instead of the turret (which is the default position of most units), I'd suggest one line that goes along witht the body on one of the sides. The turret is at the moment poorly textured, making it hard to see and control in game [2]. The corpse is fine [1].

Script: The weapon is script-controlled. After firing four shots in totally 0.75 seconds, it force-pauses for 1.25, transforming the weapon into a four-shot burst with 2 seconds reload time. Nothing fancly as script, however.

Balance: When I now read the file, I can see the obvious changes of variables, but the original values seem to be there too and they don't compute with my old calculations. If these numbers are the ones used in the previous review, I will have to apologise for the miscalculation, but according to current firepower, this unit is slightly underpowered. On a range of 215 pixels, it does 52 damage/second, compared to the Flash that pushes 80 d/s on 180 pix range. For those of you that don't see the similarities between hovers and standard units, I can tell you that hovers use almost to the point alike wepon systems in consideration of range and damage, but have a lot less armor, which is the greatest battle difference inbetween them. The Krait is very well balanced in it's hover attrubutes like speed, turnrate, armor and such, but lacks, as mentioned, in firepower. I'd want to see the d/s ration rise a tad before I give away a full ten.

My score: What is the world coming to? Hovers seem to be the only thing I review nowadays!